I took that advice to heart and when I retired, instead of relaxing, as I see most people do, I started running. My name is Keith Tomlinson and I’m 74-years-old and I’ll be running the Community First Fox Cities Marathon at the end of the month. I got into running by chance. I worked at a retirement/nursing home as a Lutheran pastor for more than 20 years. I spent most of my days running up and down stairs and all throughout the retirement community visiting elderly residents while at work. I had seen first-hand how becoming sedentary could take a toll on the body. It seemed to be that once people slowed down and stopped moving, that is when things really started to go wrong. I knew I didn’t want that to be me.

When I retired, I decided I wanted to stay moving. The first year I made sure to walk every day, as often as possible. Then when it got cold in the winter I would try to get my blood pumping, so I would run a little here and a little there during my walk. It worked! The little spurts of jogging kept me warm, and when the days started to warm up those short bursts of running got longer and longer.

I love running because I love the feeling of accomplishment at the end. I may be completely exhausted, but it’s pretty cool to be 74-years-old and to say that I’m a runner. 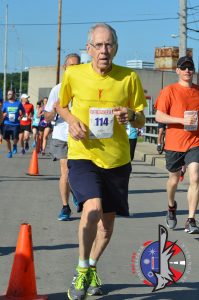 I’ve noticed as I get older that the bar to qualify for tougher races, like the Boston Marathon which I qualified for at 70-years-old, seems to get lower. I don’t believe that’s because I’m so fast, I think it has more to do with the fact that there are fewer and fewer people in my age bracket each year. I’m usually one of the oldest runners in a race but I like it that way. Many of the runners will stop to ask me how old I am, and when I tell them, they’ll tell me I’m an inspiration or to keep going. I even notice the respect from spectators cheering us runners on along the sidelines. They will cheer to the younger runners, “Go, Go, Go,” but when they see me coming, it’s almost always, “You can do it, sir.”

I think it’s a very neat thing to see people offer so much respect to the older generation, and those cheers help to keep me going. I like being able to show people that age really is just a number.

Don’t get me wrong though, I still feel like I’m an old man some days. I’ve powered through a broken heel, last year had surgery for a bulging disc in my back, and just last month I severely pulled a muscle in my thigh, but I am going to keep moving as long as I can. This year’s Community First Fox Cities Marathon presented by Miron Construction will be my ninth marathon and I’m hoping to be able to run at least ten marathons total before I am not able to do this anymore. My ultimate goal is to run at least one marathon after I turn 80-years-old.

Several of my friends and family have told me they think I’m crazy for all of this running that I do, but I just may be crazy enough to keep myself as active as I can for as long as I can. Every year running becomes more of a challenge but every year I push through. The reward is the fact that I can still do these things that most people can’t by the time they’re my age. I’m determined to keep moving for as long as I can and that’s what brings me to the start line.